My dog made me do it

Steve Sheridan of St. Louis discovered Port St. Joe and its peninsula Cape San Blas when searching the internet for dog-friendly beaches. Dogs are welcome everywhere in this Panhandle region of Florida, not to mention that the beaches and surrounding forest, lakes and streams are pristine and beautiful.

Sheridan and Ben headed south to the Gulf side of Florida and their life changed.

"He goes everywhere with me," Sheridan said. "He's my co-pilot."

Sheridan worked as a self-employed mechanical engineer so when his wife took a job in Port St. Joe, the move was seamless. But Sheridan wanted to do something different, plus he found the culinary scene on the peninsula lacking. He first opened a food truck, then a restaurant. Today, Peachy's Beach Eats serves grouper sandwiches, nachos, pulled pork and tacos. 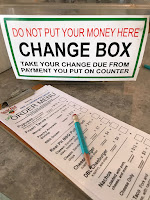 Sheridan doesn't take credit cards, however. Diners fill out a form and leave the cash on the counter. If you don't have exact money, take your change from the container.

"I wanted to do something a little different," he said.

Some people are shy about sticking their fingers in the "Change Box" but they get used to it, Sheridan said.

And, of course, Ben hangs out at Peachy's He's almost 13 and half blind but he's as much a part of the ambiance as the upside down beach chairs hanging from the ceiling. And yes, that's me having fun with my iPhone.

Check out Peachy's and be sure to sample the fish and shrimp tacos, a delicious blend of spicy slaw and delicately prepared seafood. Peachy's will also be part of Gulf County Taco Week May 2-8, 2020, in Port St. Joe, where participating restaurants will offer $5 taco specials and chances to win prizes. 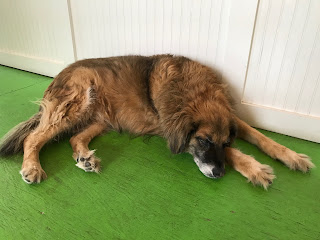 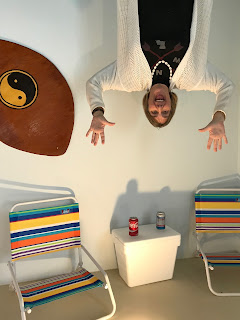 Pour your own pancakes at Old Spanish Sugar Mill

They don't just serve great pancakes at the Old Spanish Sugar Mill Grill and Griddle House at DeLeon Springs State Park in central Florida, they make you do it yourself. But that's part of the fun.

The mill dates back to the early 1800s when the first structure was built near the springs to crush sugar cane. The mill was destroyed during the Second Seminole War of 1835 and again during the American Civil War but rebuilt around 1900. Peter Schwarze saved the building from destruction in 1961, once again grinding flour utilizing the springs and serving the finished product in a home-style restaurant. The family continues the tradition today. 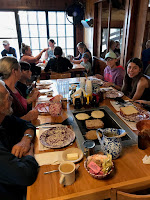 Customers sit at tables with griddles in the middle and are served two different types of pancake batter made from stone-ground grains. One pitcher contains "early American" batter consisting of unbleached white flour and the other, a homemade mix of buckwheat, rice, rye, corn and whole wheat flour. After the waiter/waitress instructs diners on how to operate the griddle, the final product is up to them. Diners can make plain pancakes or add ingredients such as banana slices, blueberries, chocolate chips or real peanut butter, among many others. Once the pancake begins to bubble, diners must flip them, let them become nice and crispy, then enjoy, topped with real maple syrup, local honey or a flavored syrup.

Pancakes aren't your thing? Those griddles can also be used for cooking eggs and French toast. Meat is prepared in the kitchen and delivered to the table. And for those with gluten intolerances, vegan pancakes are available.

I have to admit, it was pretty darn fun pouring our own pancakes and the blueberries we ordered made for some nice happy faces. 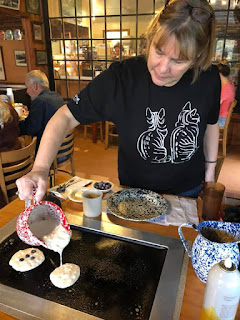 DeLeon Springs State Park in DeLeon Springs of West Volusia County, Florida, centers around a springs that delivers crystal clear waters at 72 degrees year round and manatees that love to visit in the winter. No one knows if explorer Ponce De Leon visited the springs or if they were indeed the Fountain of Youth but the Timucuan Native Americans lived here and called the springs Acuera or "Healing Waters." Naturalist John James Audubon visited the springs in 1831 and a resort existed by its shores for many years. Today, in addition to pancakes, visitors can enjoy swimming, boat tours and hiking.
Want to see how it's done? Check out Georgia Turner, the executive director of the West Volusia Tourism Advertising Authority, showing me how to pour pancakes here.
Posted by Louisiana Book News at 7:10 PM No comments: 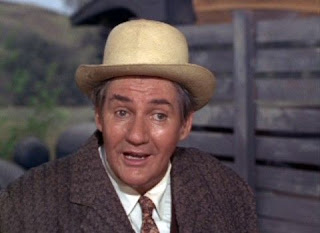 Only in the South would a day be dedicated to one of the best swindlers around. But then, Mr. Haney on “Green Acres” took advantage of Yankees.

On the second Saturday in October, the folks in Addison, Ala., celebrate Pat Buttram, a comic entertainer with a distinctive voice who's likely best known for his role as Mr. Haney on “Green Acres.” The popular TV show features a man (Eddie Albert) of Park Avenue wishing to get back to the basics so he buys a dilapidated farm, much to the horror of his fashion-savvy wife, played by Eva Gabor. Pat Buttram Day will take place in his hometown with free family fun, old-fashioned contests, a parade and live music from 7:30 a.m. to 4 p.m. Saturday, Oct. 12, 2019.

It all begins, naturally, with a 7:30 a.m. all-you-can-eat pancake breakfast at the Addison Community Center and Park located on Highway 41, just off of Highway 278. At 9 a.m., a parade will make its way down on Highway 41 North through the downtown area and back to the Addison Community Center and Park. Entertainment gets underway at 10 a.m. in the park and this year’s lineup includes Chimney Branch, a gospel quartet, Elvis and Willie Nelson impersonators and Danny Frazier. Barbecue plates, hamburgers and hot dogs will be available for purchase.

Throughout the day, family members of Buttram will be on hand sharing stories of the famous actor and Buttram’s western films and various shows will be playing in the Community Center. Mayberry tribute artist Kenneth Junkin of Gordo will be on hand entertaining the crowd with his impersonation of the Otis Campbell character from “The Andy Griffith Show.” Other activities include a children’s game, a quilt show, yard sale and buck dancing.

Admission is free and all events are held in the Addison Community Center and Park unless otherwise noted. Festivalgoers are encouraged to bring lawn chairs. Proceeds from Pat Buttram Day will be used to funds various projects in the community. For more information, call Festival Chair Shirley Sudduth at (256) 747-2779 or (256) 620-0180.

Piece of trivia, Pat Buttram has been numerous films and TV shows, including "Back to the Future III," "A Goofy Movie," "Who Framed Roger Rabbit" and "The Love Boat."

Posted by Louisiana Book News at 5:00 AM No comments:

King of the Wild Frontier and Elvis Presley have history in Perry County, Tennessee, which celebrates its bicentennial Sept. 20-21, 2019 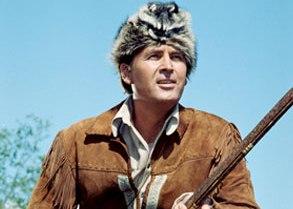 Davy Crockett was thirsty but he was lacking cash. He wandered into Perry County, Tenn., nabbed a half gallon of whiskey and left an IOU for $3.50.
He wasn’t the only celebrity to slip into Perry County. Elvis stopped in Linden when his car needed fixing (hey that rhymes!) and got a shave and a haircut while he waited.
Perry County celebrates these historic happenings and much more the weekend of Sept. 20-21, 2019, to mark the county’s 200th birthday. The two days of free festivities will include 100 vendors, an old-fashioned fiddlers contest, a county fair, tours of the county’s historical landmarks, musical guests and more.
Perry County was named for Commodore Oliver Hazard Perry, naval officer and hero of the War of 1812. The county was created by an act of the Tennessee General Assembly on Nov. 14, 1819.
The county is home to the quaint small towns of Linden and Lobelville. Attractions include Mousetail Landing State Park with camping, hiking, boating, picnicking, swimming and fishing. The Buffalo River Resort in Lobelville outfits the river for kayaking, canoeing and tubing and the Buffalo and Tennessee Rivers are popular destinations for boating and fishing. Main Street Market and Buffalo River Artisans Cooperative showcase the works of local artisans and Music on Main Street, the summer music series, features popular local and regional artists. Linden’s Historic Commodore Hotel and Commodore Music Café was named one of the six best places to stay in Tennessee.
As for that IOU Crockett left behind? A copy is on display in the Linden city archives. Wonder if they have Elvis's hair as well.
For more information on Perry County’s 200th Birthday celebration, visit www.theperrychamber.com/200thbirthdaycelebration

Weird, Wacky and Wild South is written by food and travel writer Chere Dastugue Coen who loves unusual history.
Posted by Louisiana Book News at 5:00 AM No comments: 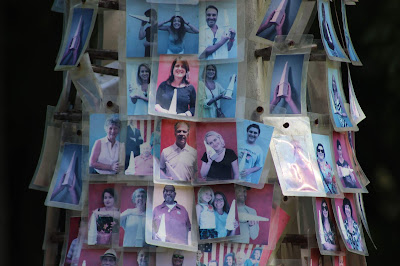 There’s lots to love about the St.Francis Inn in St. Augustine, Florida, a 1791 landmark in the oldest city in America with centuries of history within its walls, including a ghost tale or two. On the way back from town an odd statue caught my eye in the St. Francis Park across from the Inn, an obelisk covered in small photos of people. There’s a story behind this unusual landmark situated in a city park, and it connects to both the city’s Spanish heritage and the St. Francis Inn.
At one time the Inn was owned by Col. Thomas Henry Dummett of Barbados, an officer in the British marines. He fled an insurrection in Barbados, arriving in St. Augustine and buying the property in 1842. Two of his daughters married military men who fought for the South in the Civil War. His other daughter, Anna, never married and later converted the home into a lodging establishment. A supporter of the Confederacy, Anna longed to honor those who fought for the South, so she raised money for an obelisk to be installed in St. Augustine’s central plaza. It remains there to this day.
But that’s not the only obelisk in town. In fact, Anna’s obelisk was patterned after another. 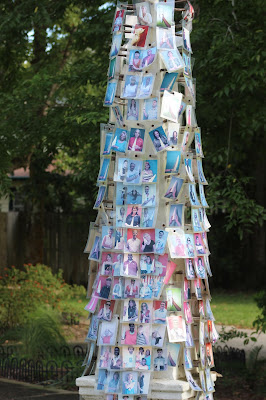 The 30-foot Monumento de la Constitución obelisk was erected in 1813 when St. Augustine was the capital of the Spanish colony of Florida. The monument aimed to highlight the new constitutional government of Spain at that time and its focus on freedom, democracy, human rights and compassion. When the constitutional government in Spain was overthrown, these colonial monuments were ordered to be destroyed but St. Augustine resisted and the obelisk inside La Plaza de la Constitución is believed to be “the only surviving, unaltered monument in the world from this campaign,” according to a city historical marker. It was placed on the National Register of Historic Places in 2012.
Jump ahead to 2015 when celebrations began for St. Augustine’s 450th anniversary. Twenty-five artists were selected to created artwork on individual 8.5-foot obelisks, replicas of the Monumento de la Constitución. Artists were asked to interpret the values attached to the original monument — freedom, democracy, human rights and compassion. Collectively, the obelisks created a “Tour of Compassion” from Compassionate St. Augustine Obelisk 450 during the anniversary celebration from October 2015 to February 2016.
One of the oblelisks was created by Leslie Robinson and featured photos of locals holding miniature obelisks. It’s now located inside St. Francis Park opposite the St.Francis Inn.
“I hope to concentrate on the ideals of freedom, democracy, human rights and compassion by focusing on the individuals who make up St. Augustine’s community,” said Robinson in the artist’s statement. “While public monuments are erected to mark momentous events in history, it is individuals, and not official histories, who make daily progress toward positive change.
“By posing with a model of the Monumento de la Constitución, individuals accept the freedom to create their own relationship to history. The obelisk stands as a record of those individual moments.
“Governments mandate civil rights only after the will of the people push these ideals forward, and change will always be instigated by individuals moved by compassion and the will to seek a better future. We are history. History is ours to make.”
Click here to view more about Obelisk Art 450. 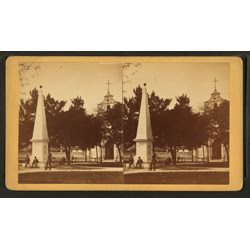